Cesena: Where you can admire not only Roman and Etruscan age traces but also Malatesta lordship testimony. Cesena today is defined a “Malatestas city” and here you can visit the Malatestas Library, the “Sala dei Nuti”, the “Piana” (Pope Pio VII private library), the Pubblic Library and the Lapidary Museum, part of the Archaeological Museum, located in S. Francesco cloister. Visiting the museum you can admire Prehistoric, Roman, Medieval findings. Ridotto Palace another noteworthy monument with its Pio VI bronze statue realized by Calligari.

San Marino: Nestled between Romagna and Marche, a few kilometres from Cesenatico, San Marino republic extends over a surface of nearly 61 square kilometres. Founded in 301 AD by Dalmatian gouge Marino. The legend tells, that Marino is the one who had taken refuge here to escape from Diocleziano Emperor persecutions. San Marino has joined together modern times and the respect of centuries-old systems and traditions. The generous and supportive little republic has opened its doors to who came here in search of shelter and protection. An exemplar history and a beautiful landscape are the reasons of the appeal exercised on the one that had the possibility for visiting it - well known personalities and some lesser known. From the towers built as defensive bulwark on Titano mountain you can admire a particularly evocative panorama. Friendly and hospitable for a deeply rooted vocation, with its rich artistic, museum and historical heritage and its multiple shopping possibilities, every year San Marino attracts more than three millions visitors.

Santarcangelo di Romagna: With its numerous shops in the centre, its little charming streets, its historic buildings and its little coloured houses of the medieval village, it offers to the visitor historical and cultural curiosities. The most visited monuments are the caves dug in the tuff, the clock tower or “Campanone”, Ganganelli square, the Town Hall, the Church of the Suffrage, the Library and Torlonia arcades.

Gradara: Has always been the border land between Marche and Romagna, dominated by the majestic Rocca, finished by Malatestas in 1325. The castle has hosted the most important families of medieval and renaissance times: Malatesta, Sforza, Borgia and Della Rovere, and it has also been theatre of great historical events including Paolo and Francesca love story.

San Leo: One of “the most beautiful villages in Italy”, it is also Touring Club orange flag. Charming capital of arts it is the centre of Montefeltro historic region. Today the wonderful historical centre, that still retains its historical beautifulness, shows immediately its ancient Roman buildings: Pieve, Cathedral and Tower alongside many Renaissance buildings, like the “Palazzo Mediceo”, seat of the Sacred Art Museum, the residence of the Severini-Nardini counts and the “Palazzo della Rovere”, seat of the City Hall.

Bertinoro: During medieval times this little village has been dominated by the Malatestas and also by Forlì, Cesena and Rimini people, becoming finally part of the Pontificial Church. It is famous for the production of table and wine grape, like Albana grape. The town preserves many historical beauties like San Romano door facing toward Forlì, and San Francesco door facing toward Polenta. Bertinoro is defined “Romagna Balcony” due to its charming panorama.

Predappio: Famous for giving birth to Benito Mussolini who gave it importance creating an efficient urban and architectural structure. There you can visit “Rocca delle Caminate”, Caproni aeronautical station and the “Casa del Fascio”

Castrocaro Terme e Terra del sole: Two are the villages one is Castrocaro with the “Rocca del Capitano” and the second one is Terra del Sole (ancient Eliopoli) born during renaissance period to protect Medicis territories from banditry. During the 19th century Castrocaro became thermal centre and still today is one of the most renowned curative and aesthetic centres in Italy.

from
€69,00
for night
Surroundings 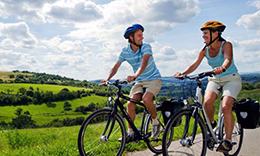 Price List
Year 2022 tarifs
Contacts and infos
You have any question? You can contact us by using the reference here below.
quote